Mass murders, blood, violence, gore all that in one game, that was inspired by 80’s slasher movies and 80’s generally. According to Party Hard, 80’s was pretty f**** decade? Anyone lived in 80’s in USA? Can you confirm this?

Story follows the mass murderer, who was a normal person, but then one night his neighbours had a party and he couldn’t sleep. Thats how he commited his first mass murder and many more to follow. The story is told through a conversation between journalist (I believe that other guy was a journalist) and detective who worked on the case of mass murderers, commited by us. Funny thing that in the most games, you would find yourself in the role of  a detective, but Party Hard is completly opposite, almost in every single thing. Since the reactivation of the blog and all games I reviewed, none story was so interesting, maybe interesting isn’t the right word, but story is one of the things that kept me playing Party Hard. I was so eager to kill everyone and to see what will happen next, what will detective say and sometimes the path of story would blow your mind. Conversations between journalist and detective can be predictble sometimes, a little lack of creativity in dialogs, but nothing serious.

Indie game means a somekind of limitiations?. Party Hard is a 2D game, with top-down camera. The gameplay is pretty simple: kill everyone. You can kill people in few ways. The basic attack that you have is a knife attack. Every other attack or a trap is generated by game for each level. Sometimes you will be able to throw a person into the fire, throw them into the big fans, cut the tree to fall on a person and some other special attacks/traps. Each level contains only few special attacks/traps. Some of them can be used once, some of them can be used few times. In first few levels it’s fun and interesting to use the special attacks or traps, but after some time it gets boring, because special attacks and traps are very repeatable.

While using either your normal or special attacks/traps, you always need to be careful and pay attention to not be seen by other people when killing someone, because they will call the police and you will be arrested then, which means game over. To evade getting caught by police, you need to kill people either behind walls or in rooms when there is none inside, beside you and the victim of course. When you kill someone, try to escape the crime scene, because sometimes when you poison the food or drink and people die near you, other people will assume that you killed them, so be careful. You have an ability to hide the body, but thats not possible on each level, as I said, everytime level restarts, game generates something differently or change the position of those things. For example if there is a motorbike to brake in your first attempt to finish the level, there is a high chance that you will not find that motorbike in your second attempt. There is a small surprise effect in the game. On each level you can make a call and most of the times you will get different useful things. For example a guy in black coat can come to the level and give you a bomb, UFOs can come, zombies (they are the best) or in the worst case, more people can come to the party and increase your amount of job to do (read: to kill).

I’ve heard and saw people saying that art style of Party Hard is amazing and I must disagree, not fully, but still I disagree, I am not saying that graphics aren’t good in this game, but if we compare graphics of Party Hard with Mute Crimson, then you will see how graphics in 2D games can be beautiful and you can do that by only using few colors. The graphics aren’t bad, but they are not certainly amazing or top notch. One thing that caught my “eye” or my ears heard, are amazing soundtracks in the game. From the main menu till end of the game, sountracks are amazing. I fell in love, I even turn on the full soundtrack of the game on youtube and just listen. As whole game is inspired by 80s, so soundtracks are too. Every time I hear any Party Hard soundtrack, it reminds me of David Hasselhoff in Kung Fury – True Survivor music video or any other video of him in 80s style.

Let’s get back on the level design. As I said special attacks are repeating, but it looks like whole level design is repeating a little bit. For example one party was happening on the rooftop of the skyscraper, later in the game there is a pool party level, happening also on rooftop. I’ve only noticed few things changed, but basically everything else is the same, when you compare those two levels. I can only assume that developers were either lazy (maybe thats a harsh word), lacked of creativity or they were simple limited. I can’t think of any other reason why level design is repeatable.  This mass murders are happening across whole USA and I think developers missed good chance to make each level/party differently, thematacly of course. 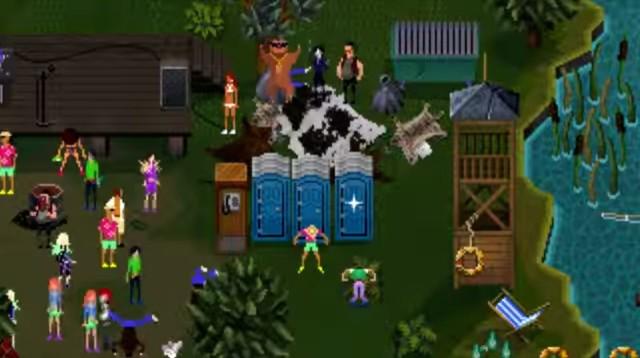 Not a bad game, but certainly it isn’t the best. Maybe I had bigger expectations than this game could delievered and in the end delievered. I don’t know, but I am not so impressed by the game. The idea and concept are great, maybe 2D isn’t the best option for this game. Story is interesting I would say, but I think they’ve could make it even more interesting. Only thing that I would complain about this game is lack of creativity in level design and in creating special attacks/traps. Both level design and attack/traps are just repeating too much and I don’t know why there aren’t more ways to kill people, because sometimes killing gets boring, not fun, but you must finish the level. When you add amazing soundtracks and nice graphics, you get a solid game. Party Hard is certainly on a track of something, if they continue to work and to improve themself and the game, I think Party Hard could be a great game series. I am secretly hoping for a sequel and I don’t know the reason why there shouldn’t be one.