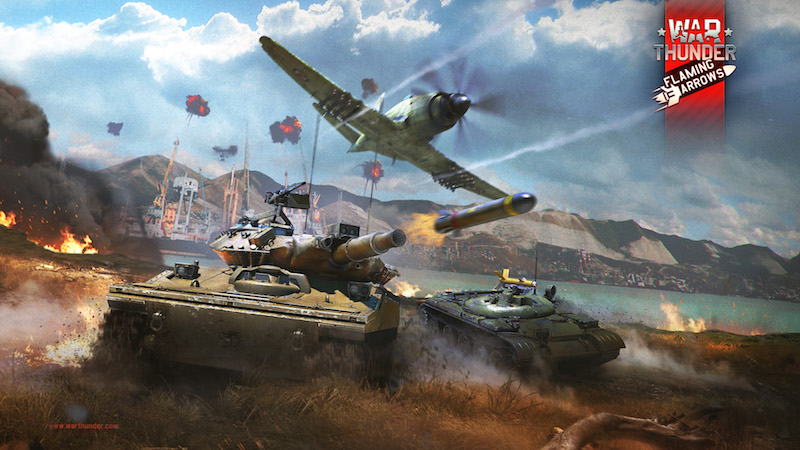 The four anti-tank missile vehicles consist of the Soviet IT-1, a formidable armoured platform which makes up for its lack of a main gun with a consignment of ATGM’s.The low-profile German Raketenjagdpanzer-2 which provides a sleek and fast anti-tank armoured asset which can fire two missiles in succession and the fast Vietnam-era US M551 “Sheridan’’ with its ability to launch both artillery and ATGMs. Last but not least, the Swedish Strv 81 lends its support to the British tank tech tree and packs a particularly powerful punch with its three ATGMs which can penetrate any armour in War Thunder. Check out the destructive capabilities of the anti-tank guided missile here: https://www.youtube.com/watch?v=ZpKSqh-I3AY

War Thunder’s latest Flaming Arrows update also adds two new maps to the mix: Port Novorossiysk situated on the coast of the Black Sea with combined battles, and a new 128×128 km map for aircraft dogfights over the English Channel, situated over the English and French coasts. For the Novorossiysk map Gaijin Entertainment’s painstaking attention to detail saw its artists create some incredible map design work based on archive data, photographs, historic air recon intelligence photos and newsreel footage. The map provides a good all round scope of gameplay with its wide avenues for quick decisive armoured breakthroughs or cat and mouse pursuit among the ruins.

Additionally, Flaming Arrows adds 25 new vehicles across five of the nations in the game, increasing the total number of vehicles in the game to more than 700. USA will get a floating tank LVT(A)1 and powerful T29, the Brits will get the Halifax Mk B.III bomber and Wyvern S.4 naval strike aircraft. Germany adds the dreaded Sturer Emil SPG, and the Soviets add a jet in the form of the Yak-30, as well as two paratrooping SPGs. Japan gets three new aircraft in total, including the N1K1Ja and the N1K2.

One additional addition to this latest War Thunder update is the He 219. Nicknamed the ‘Eagle-Owl’ this German night fighter is the first aircraft to be added to War Thunder through the the games revenue share program and was created by a member of the War Thunder community. The He 219 – was designed and built as a combined effort between the community (model, textures) and the War Thunder developers (flight model, damage model, armament) and takes its place as a rank 4 vehicle in the German research tree.