Monsters and Monocles is a posh Roguelike shoot-em-up (SHMUP) featuring scores of weapons, different stages with a variety of enemies, and a heaping helping if challenge. With more weaponry and arenas to wield them in on the way, this is an Early Access title worth keeping an eye on.

There isn’t much of a story here; just a brief cutscene in which a wizened old man opens up a spooky-looking urn and out comes… Something.

Your intrepid team of gentlemen (and one gentlewoman) spring into action to save the day by fighting the evil that has presumably been set free by this turn of events. 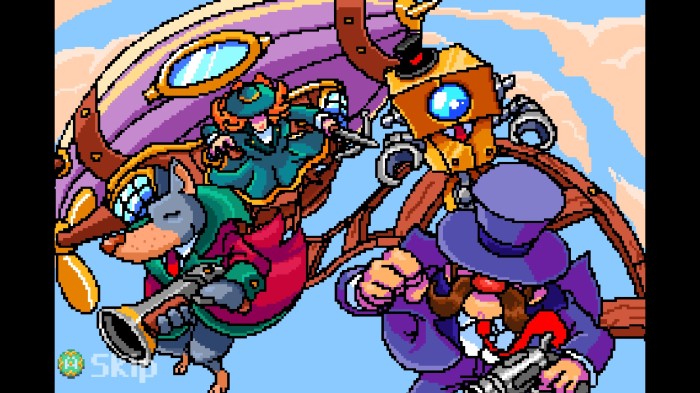 You can use either keyboard or gamepad. Both do a serviceable job, though I preferred the latter. 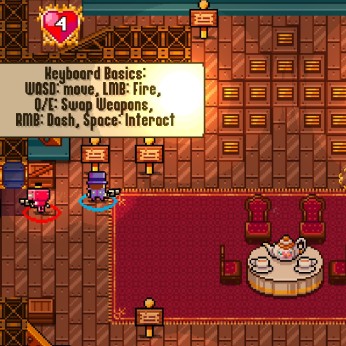 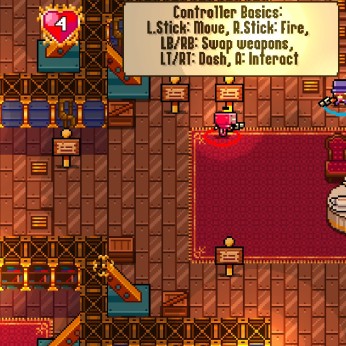 When you first start playing Monsters and Monocles, you choose from one of four characters and are spawned in the starting hub, which is a steampunk airship laden with the relics you’ve collected during your adventure (if you have any).

Note: Each of the four players on your team can choose the same character if they wish. The colour of the character will change to enable you to differentiate who’s whom. Character selection is merely an aesthetic choice and each character starts with the same gear.

Relics can be used to add special abilities to your characters and there are currently 20 available to add to your collection.

From the hub, you can select from one of three zones, which are displayed in picture form on the floor of the center-most room: Mansion, Tomb, and City.

Each has their own distinct appearance and enemy types, and provide a procedurally generated set of levels. On each level, you are presented with a task—collect this item, kill these enemies, escape floor using the nearest exit, etc—and upon completing it you are allowed to ascend the stairs leading to the next level. Between each level is a store where you can buy tea, which restores your health, and weapons.

Both of these things can be found within the level by killing enemies and destroying objects.

Your character can carry up to two weapons which you can freely choose between. There is no ammunition, but weapons do overheat and take time to cool down, so it’s wise to ration your shots nonetheless. Shooting enemies usually results in them shooting back and the game can get quite bullet hell-y with all the projectiles zipping around. Add in a healthy dose of self-destruction after death and you’ve got yourself a mess. 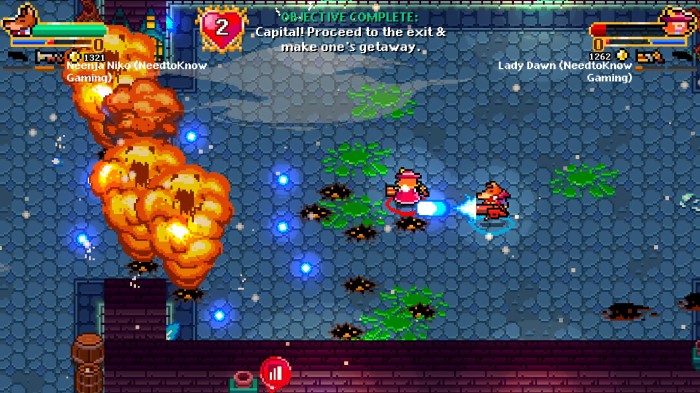 If you die–and you will–you have three chances to respawn instantly. In the case of multiplayer, your partner can shoot your grave until you rise from it, though the disadvantage of such affairs is that your life pool is shared. Keep that in mind when you take a friend with you into the perilous depths because once you lose all your lives, it’s game over.

Monsters and Monocles can be played alone or with a friend both online and locally. I experienced no issues with online play.

The game is lovingly done in bright pixel art. Both playable characters and enemies are visually appealing, unique, and detailed. Each of the 3 available environments offers variety in where you kill baddies. Aforementioned baddies fit in with the overall theme.

The music is very serene in comparison to the frantic action, which was a little disconcerting at first.