Oh no! A tribe of savages has ransacked our village and kidnapped the Shaman! I am overcome with grief and sadness and OH MY GOD THIS IS SO PRETTY! LOOK AT THESE LITTLE HUTS ON FIRE!

Kickstarter has lived through different eras, or trends. There was of course the first craze, when quite a few high profile projects were funded. Then as the years went by there was great disillusionment as a lot of those games were cancelled or released in an unfinished state without delivering on the promises that were made. Since then, Kickstarter projects are scarcely announced in the media and you will only occasionally see headlines about the third and current phase: the release of a lot of indie games that reached their funding goal and whose developers made good on their promise. Candle, developed by Teku Studios, is one of those unsung accomplishments. 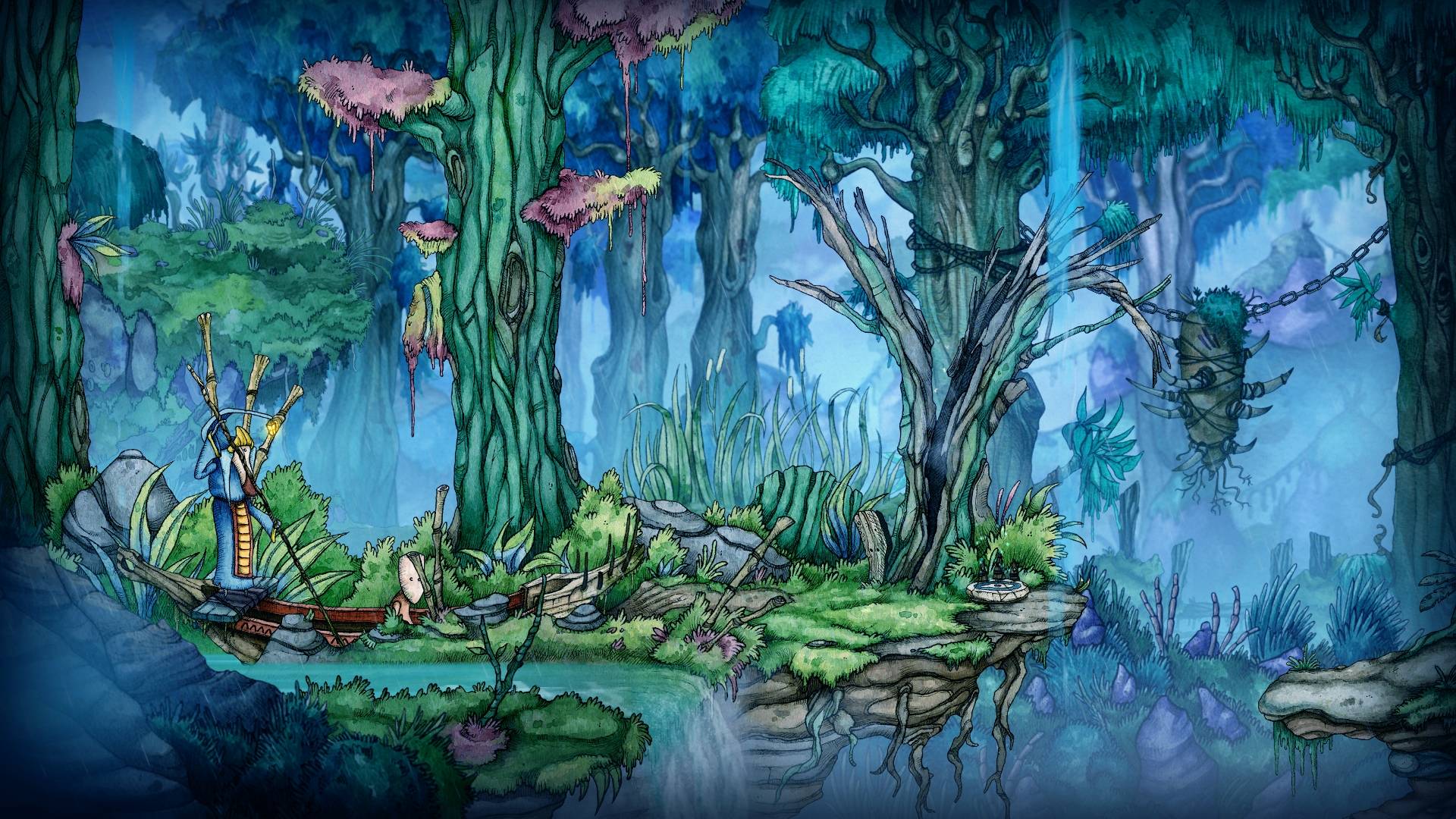 Teku Studios set themselves the goal to use handmade paintings for all the backgrounds and sprites. So every single movement in this game has been drawn by hand before being scanned, and the result is magnificent. Not only stunning but also lively, as the levels are oozing with movement. Wildlife, plants, falling leaves and even the sky do not give the impression of a still painting, they are all animated. While this amounts to a huge effort, I assumed that the ending levels would start to wear thin, and I am pleased to report that until the very end everything is amazing.

Enough gushing, let’s talk about the game proper hiding behind those pretty landscapes. Candle is an adventure game with a lot of puzzle elements and a fair share of platforming. Not the Super Meat Boy kind of platforming, more towards Another World (also known as Out of This World) and Flashback with ledges to grab and a specific sequence of movements to achieve with the right timing to get past a deadly obstacle. Just like in those games, there are plenty of deadly traps and dangers to overcome but no shooting. Here we are closer to Oddworld: Abe’s Oddyssee/Exodus where stealth can be necessary to get past hostile tribes. Finally, from its extensive use of “point and click” style adventure puzzles and gorgeous graphics, Candle is also very close to a game like Machinarium. We are talking about mini-puzzles to solve, as well as items to find and use where necessary. 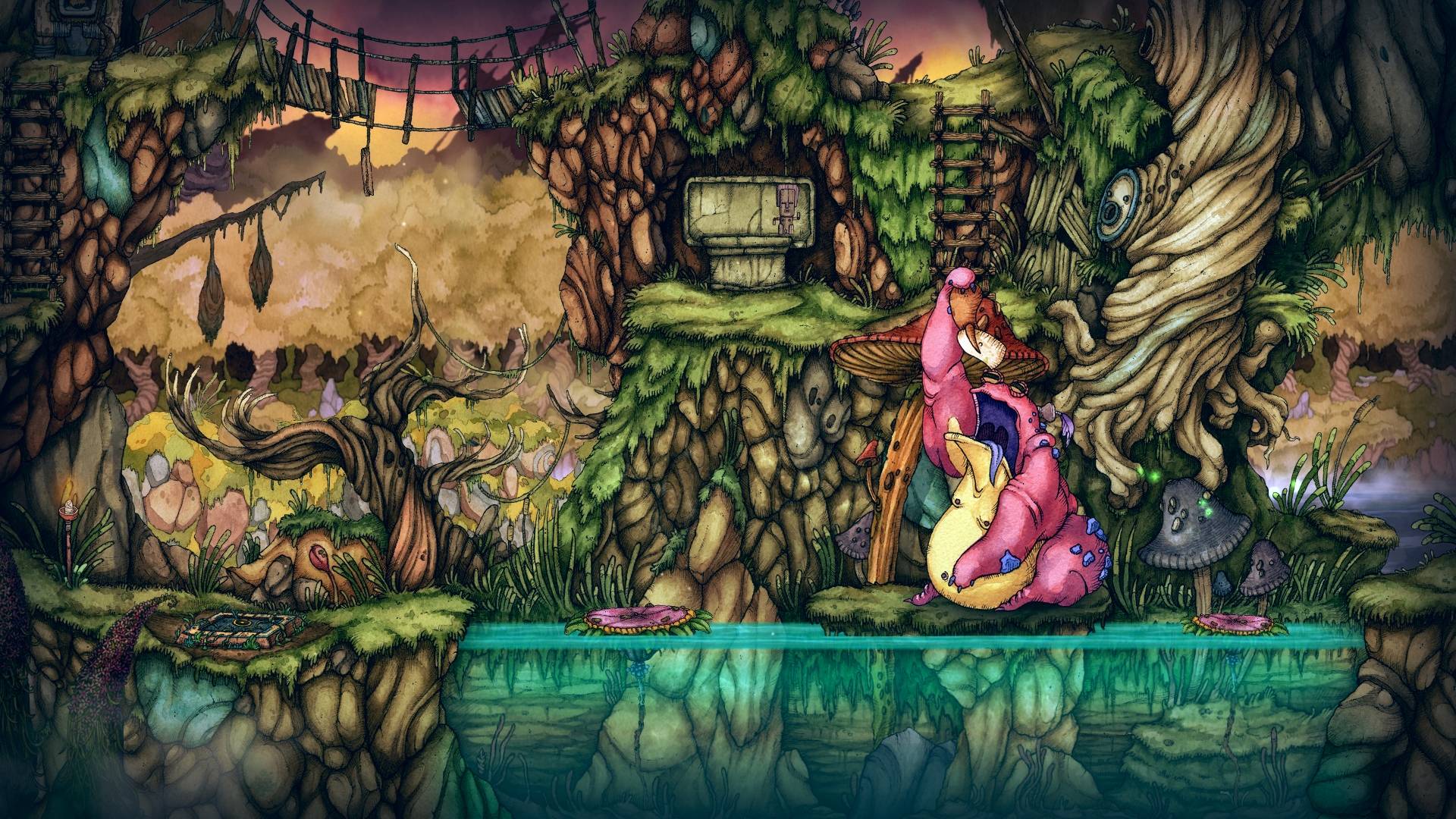 The controls are thus not point’n’click with a mouse, they are based on the arrow keys and that’s where my main criticism of the game will be: problems with the controls. For many years now it has become quite common to use WASD courtesy of First Person Shooters. Even on gamepads, the left hand is used to control movements. Arrow keys are an outdated model and furthermore the Spacebar is a clunky way to jump when W (or UP) could do the same solely with the fingers dedicated to movement. Playing Candle with Spacebar + Arrow keys was tedious to me and it got worse during some of the mini-puzzles in which Q and R are used to rotate some elements. If it was WASD and QE I could do it all on one hand rather than painfully struggling with some movements on my right hand and some movements on my left hand. I thought the game was designed for a controller so I plugged one in but it did not work properly. All this would not have been a problem if I could have just rebound the keys but sadly it is not possible and I do not understand why remapping keys is absent from so many games. Rebinding keys in shooters or platformers is absolutely mandatory, dear developers. Please stop forgetting that. 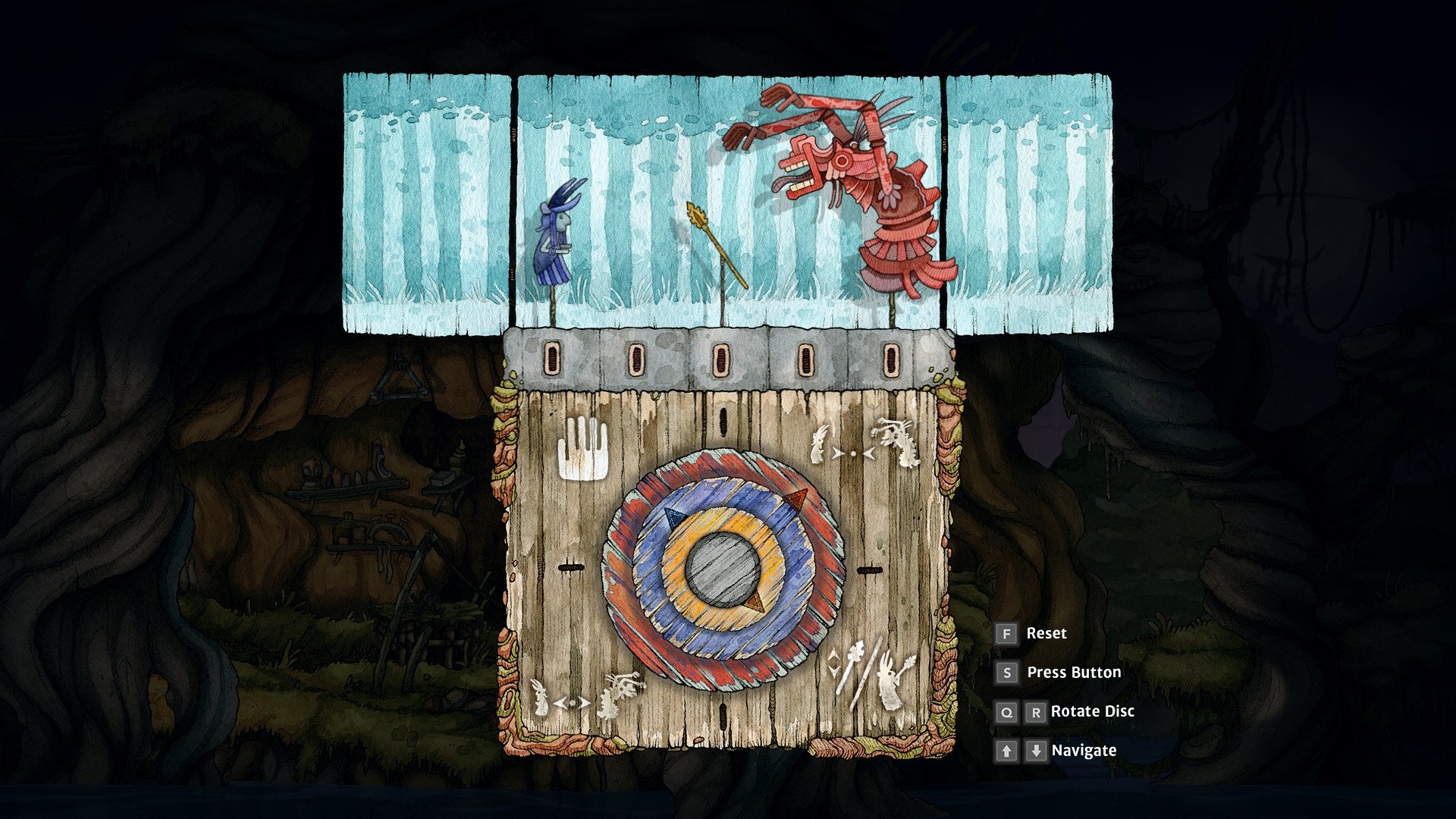 While I mentioned before that Candle is inspired by some older games, some of their more frustrating elements can also transpire here. A lot of “trial and error” can be necessary during some sequences and it can put off a number of players. I did not find this a problem because the checkpoints are very frequent and mostly because it reflects the hostile and brutal nature of this unknown world. As in Machinarium, there are puzzles or elements to find that will leave you scratching your head for a while or looking for a walkthrough online. I did find some of these moments quite unnecessarily difficult, such as a hidden ledge that I had to reach even though I thought there was nothing there. I guess it’s one of the downsides of having such gorgeous backgrounds! More worrying, there was a sequence in which I thought I could run for a ladder to escape but the ladder somehow disappeared during that sequence and magically reappeared after it was over. There were a few too many moments when I was stuck because I had not seen something, and while I add this to my negative points I do not think the game suffers from this much more than other similar games in the same genre, although a hint system would have been welcome. For all of those more troublesome puzzles there was sometimes a brilliant one to counter-balance (the drumming sequence was genius). A recurring theme element of Candle is to activate things with fire but rain and pools of water can make it more tricky than just going from A to B while carrying the candle.

I am on a roll with the criticism so I will add the cut-scenes and bubble speech. They are nice and all but too slow to unfold, especially since the narrator basically summarises what a character was saying. And what a narrator – Terry Wilton, who you might know from the Trine series to which he added the magic of his voice. Excellent delivery in Candle as well. The story took time to unravel but then was rather good, especially as we get closer to the end. Overall quite charming but with darker overtones. The music accompanying it all was great. Lengthwise, it took me a little less than 10 hours so it really is a full adventure and not a quick snippet. 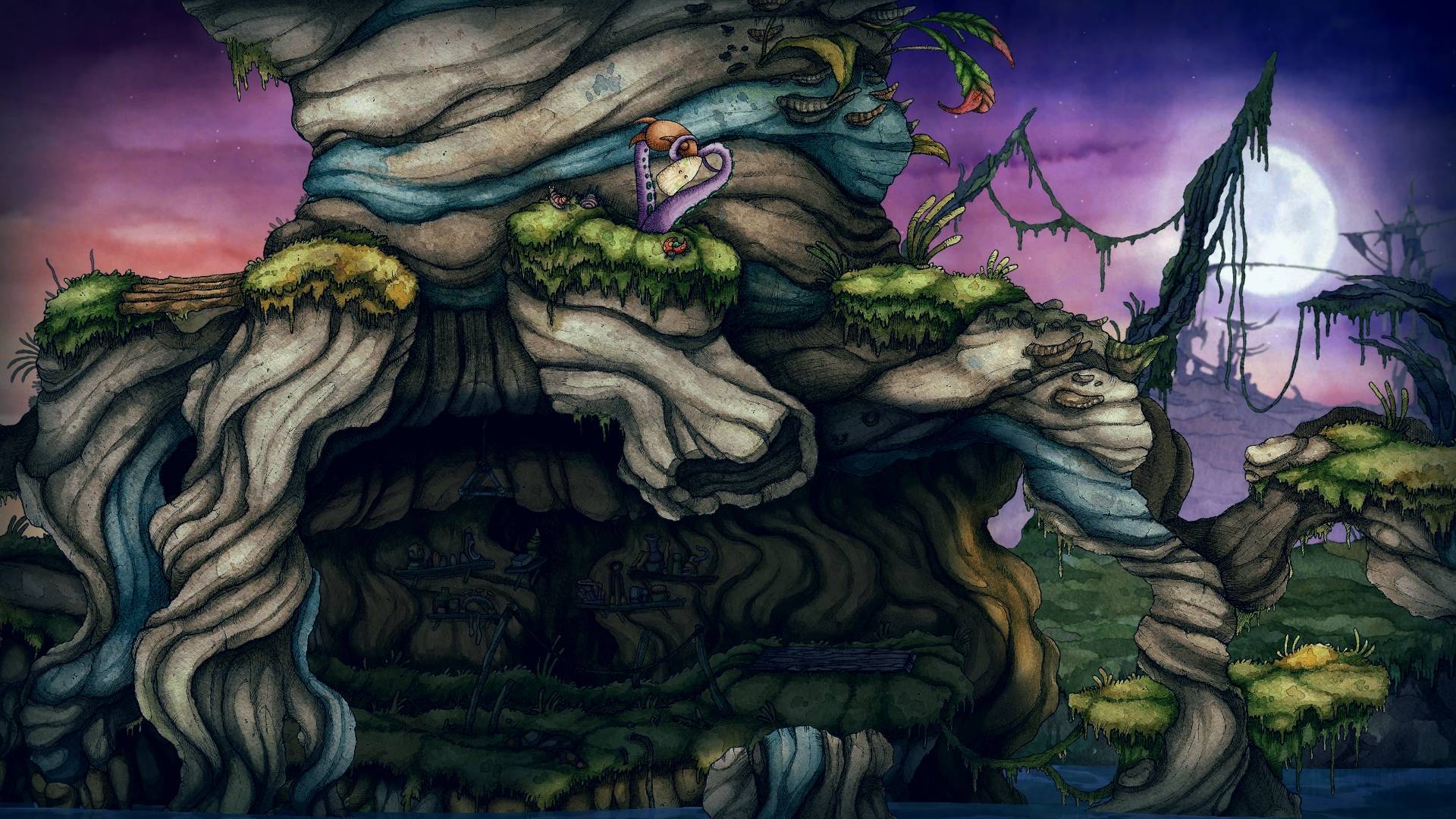 In conclusion, despite having to constantly fight with the controls I had an amazing time with Candle. Not just because the watercolor art is absolutely gorgeous and the voice of Terry Wilton is fantastic, but also because Teku Studios crafted a wonderful and dangerous world to explore that is full of character even in the tiniest details. Some occasional platforming requires timing and can be tough for those who hate trial and error – some of the items are really difficult to find – but there is still a good balance between everything so there is always something new to encounter and replace any frustration with marvel. A real diamond in the rough that I will remember as fondly as its inspirations.

Here is my video review: